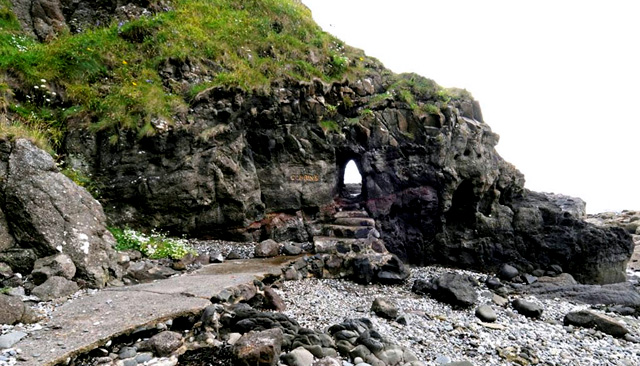 On Saturday 5th April 2014 twenty one members of the M and M’s had a breakfast meeting at which the speaker was Councillor John Matthews from Larne Council. Councillor Matthews gave us an update on the plans and progress of The Gobbin’s Path project. The path was originally designed and constructed by Berkley Deane Wise, the Chief Engineer of the LMS (NCC) Railway. It was completed in 1902 as a commercial venture to attract tourists into Whitehead and Islandmagee by train but fell into disrepair after the Second World War.

Various attempts to reinstate it have taken place since 1972 but it was not until 2006 that Larne Borough Council secured funding to get the project underway. The cost is approximately £15 million.

The project when completed later this year will provide a unique visitor experience in the natural environment of Islandmagee and will include a Visitor’s centre, a cliff-top path and a number of new steel bridges which will be copies of those originally installed by the railway company. A new car park is being provided at the Visitor’s centre near the Rinkha and minibuses will take the visitors for the 3 minute trip to the top of the path. Tour time is approximately 2 hours and the anticipated cost for the visit is £6 per head. The project is due for completion in October 2014 and will provide a new and much-needed tourist attraction in our area.