M and M’s Go To Work 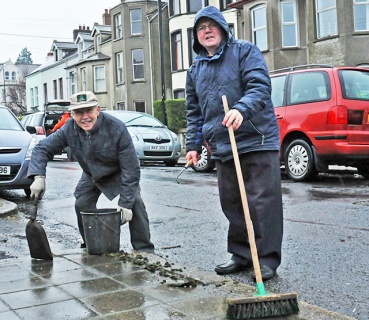 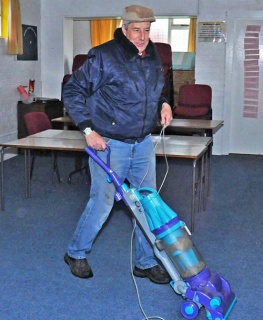 This has been a busy month for our Men’s Group (the M and M’s) at Whitehead Methodist Church. On Saturday 30th March Terry had planned for us to start early at the church and have a Work Day when we would repaint the car park lines and do other painting jobs outside. But you may remember that it turned out to be a very wet morning so after pondering a while, watching the rain through the window and, of course, having a cup of tea we decided to concentrate our efforts inside instead until the rain cleared. So there was a lot of dusting, polishing and hoovering done by a sound team of men including our minister, Gary and Brian. By eleven or so the rain had eased off a bit so half a dozen or so of us braved the elements and started weeding the car park and clearing drains round the manse. While we were working at the front we could only watch helplessly when a passing car sliced off the wing mirror of one of the other cars parked on Balmoral Avenue – without stopping of course! An unwelcome surprise for the car owner on their return, I’m sure.

When the work was all done – or as much as was possible, we adjourned to the Dobson Room where a dozen of us had lunch of pies, chips and mushy peas prepared as usual by our chef John C. Although we didn’t get all the jobs done that we had planned to do, we had a good time and the craic was good. We’ll just have to finish it off another day when it’s dry.