On 24July 1756, John Wesley preached his first sermon in the Session House at Carrickfergus. In all he preached eight times there between 1756 and 1778, the last one being when he was 78 years old. However the “Christian Advocate” of 11th December 1900 records that, “.…after Wesley’s last visit in 1778, Methodism died out there, and not a trace of it seems to have remained for about twenty years”. Yet the same article goes on to record, “…that (in 1900) there is at Carrickfergus a good morning and evening Sunday School and a vigorous Christian Endeavour Society. At Whitehead too which is fast becoming one of the most popular watering places in the North of Ireland, ….new premises have been erected during the year at a cost of £600”.

The coming of the railway in the 1860’s/70’s had really put Whitehead on the map. It was part of the Belfast and Northern Counties Railway’s plans to develop the town as a tourist resort by providing the Blackhead and Gobbins paths, the promenade and the bandstand. 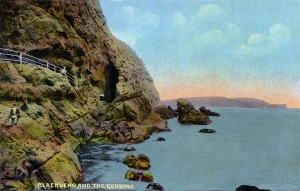 Prior to that, it had remained a small community comprising a few houses, the Coastguard Station and the remnants of the Moses Hill plantation castle (Castle Chester).  Growth was further stimulated by the railway company granting free railway passes, a “Villa Ticket”, for ten years to each occupier of each new dwelling constructed in the immediate area. ), but the town lacked both churches and clergymen.

However, encouraged by these developments, the Rev  J W  Jones of Carrickfergus Methodist Church had negotiated to lease a site in the centre of Whitehead for the building of a Methodist church from Mr J Raphael of Cookstown, Whitehead’s ground landlord. Plans were drawn up by Mr. H. Sykes, a Belfast Architect and Whitehead resident. The work was begun in January 1899 and completed in April 1900. The official opening was performed on Saturday 23rd June 1900 by the President, the Rev  Fredrick W  MacDonald and Bishop Hendrick of the Episcopal Church of America.

The Rev Richard Butler was appointed as the first minister of the church but sadly he died the following year and Mr T J  McCord was appointed as evangelist at Islandmagee, presumably to cover both societies. In 1903 Rev Richard Cole, late of Carrickfergus, took up his ministry in Whitehead and served there until his retirement in 1921. Mrs Cole became superintendent of what was then Whitehead’s only Sunday School and Miss Dorothy Dobson, one of our founder members who died in 1999 aged 98, was to assist Mrs Cole in this work from 1913 onwards.

In 1908 plans were prepared for a manse on grounds adjacent to the church. The plans were drawn up by Mr  A B  Dobson, the father of Dorothy and Eric, and work proceeded quickly under the direction of Mr H  Girvan of Larne. An elegant watercolour sketch of the proposed manse, done before construction commenced, hangs in the Dobson Room of the present church as does an illuminated address presented to Rev. Cole and Mrs Cole on their retirement from active ministry.

Rev and Mrs Cole remained in the manse and continued their work until 1921.

He died in 1925 and his wife in the following year. To mark their many years of faithful service, on Saturday 6th November 1926, the beautiful “Cole” memorial windows were unveiled at the morning service in the church, led by the President of the Methodist Church in Ireland, Rev E B  Cullen.

The Cole memorial windows below grace our church to this day.

To find out more about the history of the Methodist Church in Ireland visit the Methodist Historical Society of Ireland (MHSI) web site at http://methodisthistoryireland.org/